VDB Arabians is a small Arabian studfarm, nestled in the quiet town of Herselt, Belgium. The story starts almost 15 years ago, when proud owners Bart and Lieve acquired their first horse, an Anglo-Arabian mare called Boncha (by Shakan) as a riding horse for Lieve. It didn’t take long before Boncha got the company of a second mare: partbred Arabian Shakira, who also happened to be a daughter of Shakan.

Owning two mares, temptation grew to breed a foal and naturally, so it happened. In April 2006 Shakira gave birth to a beautiful vibrant red filly sired by VD Ghillian. She was named Faryda and with her VDB Arabians was born. Later that year Faryda was shown at the Belgian National Championships claiming the title of National Champion Part Bred Foal. So far she has been unbeaten in partbred halter classes with a total of 4 National Champion titles and currently Faryda succesfully competes on Amateur level with Bart and Lieve’s eldest daughter Lore.

Faryda proves that she’s not only a specatcular showhorse, but a tremendous producer as well. In 2011 she gave birth to an outstanding bay colt sired by Massai Ibn Marenga. VDB Faraj has been equally succesful as his dam conquering the showrings in Belgium and abroad. So far he has earned 18 gold medals, 5 National Champion titles and was awarded 5 times Best in show. At the age of three he was backed and will start a career in western pleasure soon.

After breeding partbreds and anglo arabians for several years, Lieve wanted to expand her breedingprogram to purebred Arabians. The first mare to enter the breedingbarn was Russian related ES Raisin by MM Sultan, imported from The Netherlands in 2009. ES Raisin proves to be a valuable broodmare for Lieve and has become the cornerstone of the VDB Arabians program. So far, three daughters have been retained to continue her legacy and they prove to be equally succesfull.

Over time several other mares were acquired such as Perlina (by Vivaldi Rach), Perolateh (by TF Afrikhan Shah) and most recently Bint Alianna ( by Padron’s Psyche). Lieve chooses to breed only a very limited number of foals per year, as she values quality over quantity which can be clearly seen in her choice of stallions. With foals by champion producing stallions such as Abha Qatar, Kanz Albidayer and Fadi Al Shaqab the future looks bright for the VDB Arabians breedingprogram and we can’t wait to see what they will accomplish in the upcoming years. 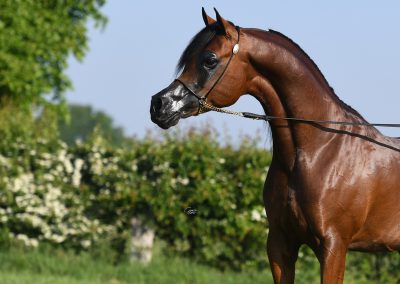 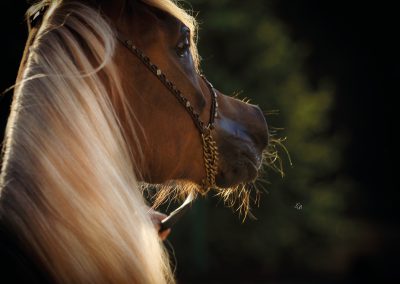 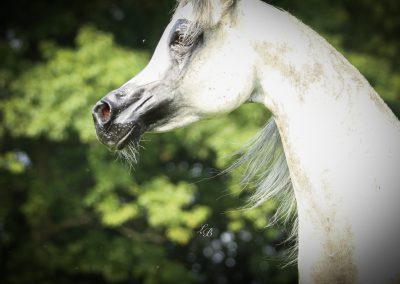